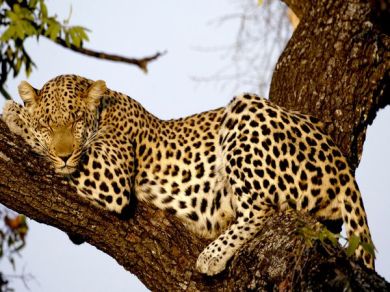 Once upon a time there was a leopard called Laurus.  He was a brave leopard, he was good at hunting, he had taken a mate or two over his years.  So in leopard society he was considered a good leopard.  But Laurus had a yearning within him, is this all there is in life?

One fateful day Laurus had a blinding flash of awareness as he sprung upon the monkey who was to be his next meal.  This monkey was a good monkey living his life according to his nature, so why did Laurus have to kill him, take him from his monkey family in order that Laurus might live?  The consumption of life in order to live!  He knew he had to kill to live, otherwise he would die.  Laurus was overcome with guilt and conflict raged within him.

So Laurus moved away from leopard society, he needed to contemplate the meaning of his existence.  Why were things the way they were?  Other leopards laughed at him “Silly Laurus” they said “ he is at the top of the world, master of earth and sky, why could he not just be content?”  “This is the natural order of things” they said.  Laurus didn’t care he just knew there had to be more, there had to be another way.

One day he came to sit on a rock beside a bog, he contemplated the bog, rotting matter, death in the making.  Yet at the same time teaming with new life.  He saw juicy caterpillars consuming the plants with the need of hunger for survival, “same as me” he thought.  Then he heard a small fluttery voice “Laurus, Laurus” he looked around and there was a beautiful orange butterfly dancing before his eyes “who are you?” said Laurus “and how do you know my name?”  “I am Clovis” said the butterfly “and I know many things”   Hmmmm, thought Laurus, let’s see what he knows.  “I am on a mission, I want to know if there is away to exist without consuming another, taking the life of another.  What do you eat?  Clovis giggled, I only drink very small sips of honey and tiny drops of pollen from those flowers that you see before you in the bog.  Laurus sighed, then you steel life from the flowers.  “Not so” said the butterfly, “I help the flowers in return for what I take”.  My tiny feet and tongue drop pollen into the centre of the plant so that is can re-generate itself.  “Oh” said Laurus, “then it must be good to be a butterfly you do not harm!”  The butterfly giggled and fluttered away.  Calling back as he left.. “Look at the juicy green caterpillars, they are my children”.  Laurus, was crest fallen, he felt he had been tricked!

Sighing he got up from his warm perch on the rock and sauntered away.  He was staring to get hungry.  Night was falling, so he climbed up a tree to find a comfortable place to spend the night.  He also knew, much to his dismay, that this was also a good vantage point to spring upon some dinner!  A beautiful big yellow moon rose up as darkness fell.  Laurus contemplated the moon in the sky, wondering whether it needed to consume another to exist!

Out of the corner of his eye he saw something silently fly by, hmm and owl he thought.  He had always envied the owl at least his kills were quick, his pray didn’t know until it was too late.  But a kill was a kill, another life form taken from their habitat in order for another to live.  The owl settled onto a branch in the tree not too distant from Laurus.  The two predators contemplated each other silently for awhile.  Eventually Laurus said “owl how do you feel about having to kill, to consume in order to live?”  the owl blinked at Laurus and hooted “ such personal questions, when I don’t even know your name”  “Sorry my name is Laurus of the leopard tribe”  “Ah” said the owl “I have heard of you, the mad seeker, they call you”  laurus gave a growl of disgust. “and you are?” he asked  “I am Merlowl” hooted the owl.  “Well then, so how do you feel about eating others to live?” pressed Laurus.   The owl ruffled it’s feathers and vanished in a sparkle of gold leaving only an egg behind, then the egg became a mouse, then a flower, then a ball of sparkling gold energy and once again an owl sitting on the branch. The owl was amused as he watched Laurus regain his composure after nearly falling of his branch.  “How did you do that, what does that all mean?”  The owl once again blinked and stared with his penetrating eyes at laurus and then silently took flight into the night.  From a distance laurus heard the cry of Merlowl “that is for you to discover Laurus the seeker!”